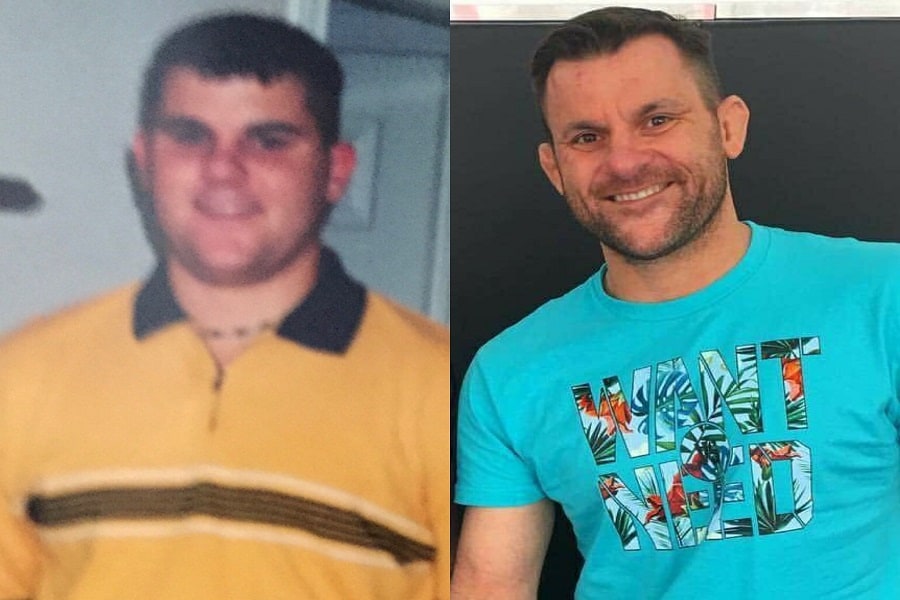 A lot of people won’t recognize the guy on the left.  He didn’t have many friends, wasn’t outgoing and didn’t have a lot of confidence in what he was doing or where he was going in life.  He was also me…before Jiu-Jitsu.

I had reached about 225 lbs in late 2001.  I’d graduated college and started my career as a financial analyst, sucked into the monotony of waking up, going to work, coming home and going to sleep.  I knew that I had to lose weight and get in better shape, but also hated exercising.  “Working Out” had always come in the way of competition or playing sports, and this was the first time in my life that I wasn’t on a team or had a coaching staff to hold me accountable.  I was on my own, I was out of shape, and I didn’t know where to turn.

In January 2002, I wandered into Texas Self-Defense Academy as they were preparing for a Grand Re-Opening and all I knew about Brazilian Jiu-Jitsu was the Royce Gracie/UFC connection that I had watched on VHS tapes back in high school.  I wasn’t a fighter, but I also knew that I had to “trick myself” into exercising if I ever wanted to turn my health around.  The beginning was tough, but I stuck with it and made some dietary changes along the way to help out my cause at home.

I now fluctuate between 170-180 lbs depending on the time of year, but the biggest thing is how I feel about myself.  I’ve gained years back on my life.  I love the person looking back in the mirror.  I believe in myself.  I know that I CAN…because this picture reminds me that I DID.